It is a common but disturbing knowledge that coming out as gay or lesbian or a transgender is not the safest thing to do in this world. There is already so much of stigma and misconception attached to it, that what scares the LGBT people more than the actual declaration is what comes after it.

From unwanted opinions to disbelief to mockery to hate and violence – you name it and you have got it.

People and their sheer disregard for anything that they believe to be “surreal” or “unnatural” have always stepped up to undermine and suppress another smaller group of people  – ever since the dawn of civilization. One would have thought that with the sun now shining bright above with all the development and modernisation, this manner of feeling powerful over a minority would take a backseat.

Oddly enough, that is not the case.

But what if people who are not supposed to take satisfaction in bullying or alienating the LGBT community also take part in the process?

Yes, we are talking about parents and immediate family. It is most difficult for an LGBT person to come out to his or her family in fear of “dishonouring” the family or being the reason of “shame”. Nobody wants to be that person to make one’s parents feel ashamed of their existence, especially when there is no fault of their own.

The problem with Indian parents in 90% of the cases is ignorance and lack of awareness. Whereas for most parents in countries where homosexuality is illegal but quite exposed, the main issue for the parents is the acceptance. But here, they pretty much have no clue.

It is shocking and terrifying to see that quite a majority of the parental generation of today’s youth (20-35 years) actually believe that homosexuality is sort of an extra-terrestrial fantasy and transgenders are people you just see at traffic jams.

But times are changing and they are gradually learning to accept and embrace their children’s gender and sexuality being different than what they automatically assumed.  The frequency in which we see Indian parents stepping forward to support or speak for their children or stand beside them in their battle against the society is slowly increasing.

Occasionally, we even see it happening publicly, which is a big boost for the other community members and an encouragement for their parents.

In 2016, at a discussion around the movie, Evening Shadows directed by Shridhar Rangayan, one of the parents of LGBT children, a HR professional , spoke up for her gay journalist son:

“After I made him speak up about being gay, his first question was, ‘Ma, are you ashamed of me?’ I gave him a hug and asked him why he didn’t tell me this earlier. After I supported him, I saw the impact it made in his life. He started feeling more confident about the way he carried himself and I could see his happiness. Parents must realise that their children are afraid of hurting you so they don’t come out easily”

Evening Shadows is a story of the emotional journey of a traditional mother from a south Indian village and her handling of the ‘coming out’ of her gay son; it is based on the director’s own life experiences.

The discussion, arranged by Solaris Pictures for the promotion of the movie, The meeting, which was set up by Solaris Pictures to promote their upcoming film Evening Shadows, saw a set of 10 Mumbai-based parents formally come together to discuss how they could help support each other and their LGBT children and also to discuss how they could reach out to offer support to other parents in similar situations.

The consultation focused on the why’s and how’s of forming a structured and functional parents’ support group. Speaking about her experience at the consultation, Chitra Palekar, one of the most vocal voices among the parents said:

“We have shared our experiences informally at several events, but there was no real progress. This workshop, under the guidance of experienced facilitators, helped us gain clarity regarding the issues involved in this work.  The meet created a vision and took the first step towards forming an organization, which we all hope will cause a break-through in supporting LGBTQ children and their parents.”

We have also seen a host of Indian parents participating in the various Pride Walks and Rainbow Festivals that take place in different cities of the country. Upon being interviewed, many of them have admitted to being shocked or surprised or even go into silent denial when they found out or were told of their children’s homosexuality. 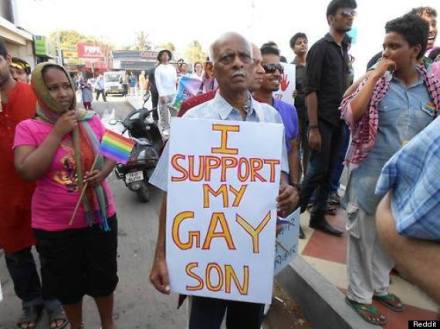 But they took the effort to look up the actual concept on the internet or to speak to people who have expertise, and come to terms with the fact that “this is what it is”.

Keeping in mind all the suffocating taboos and myths we have involving the issue, we could tip our hats to these parents and hope that these are the stepping stones of a more embracing scenario for the LGBT youths of future.