Transgender Rights in God’s Own Country

For centuries, the transgender people have been ubiquitous in the population of our country – from the times of royalties to the busy, bottleneck traffic of Indian streets, they are everywhere. One might argue that they are not much visible in the professional settings, but is that really true?

There are hundreds of people around us, working with us, taking the same bus, train or metro with us who do not conform to the gender they were assigned at birth. But the fact that they cannot express that outwardly with their behaviour or appearance is where the real issue lies.

The psyche of the Indian people is conditioned to stereotype transgenders as people who sing at weddings, bless a newborn, beg at traffic jams or on trains and are involved with sex work. Automatically in their mind, they associate the community with substandard occupations; but what they do not want to think is the reason why they are forced to take up these jobs.

If identifying as genderqueer is a challenge in India, coming out as a transgender is even more difficult. From subtle alienations to getting ousted from family to full-blown hatred, the hurdles come in a wholesome package deal.

However, with the Government and the legislation taking baby steps towards enforcing equal rights for the community, a handful of organisations and society members are coming forward to work towards debunking the taboos and myths and including them in the mainstream.

Kerala is the torchbearer of this crusade among the Indian States.

In September 2015, Kerala became the first State to bring out a policy to give the marginalised transgender community what they truly deserve. The social justice department’s draft was in compliance with the Supreme Court’s 2014 judgement recognising the community as the third gender.

The policy mentions the presence of over 25,000 transgender people in Kerala, and documents the stigma and discrimination they face within family and in society. Building on the transgender policies of the previous Congress government, the current Left government has allocated Rs. 20 Crores in two successive budgets to fund development initiatives.

So what is being done in and around the state, both by the Government as well as the common people that give us an assurance that things might get better?

In 2016, Kerala’s Left Democratic Front government on July 8, Friday, announced a pension scheme for transgenders aged 60 with an aim to protect the rights of the third gender.

The year also saw Kerala identifying the voting rights of transgenders as two persons of the ‘third gender’ voted in the assembly elections – Surya and Suji.

In December, Kochi witnessed the first transgender school in India, Sahaj International being inaugurated to let the ones who were compelled to leave their studies, complete their class X and XII board exams.

This year in June, Kochi metro hired 23 transgender employees – a first of its kind instance where Indian Government jobs are concerned.

Also in June, the Dhwayah Arts and Cultural Society, a transgender organisation held the Queen of Dhwayah 2017, a transgender beauty pageant within the state.

Earlier this year, a one-day athletic meet was organized for the community at Central Stadium in the state capital, Thiruvananthapuram on 29th April. Around 132 transgenders from 12 districts of the state took part in this first ever event.

Back in March, the State Government embarked on a ten-day long survey project for a head-count of transgender people in Kerala to include them in their Literary Mission.

The common people, both members and non-members of the transgender community are equally participative in this recent surge of activities.

A Kochi-based young and upcoming designer, Sharmila Nair took the help of two transgender models, Maya Menon and Gowri Savithri to promote her collection Mazhavil, meaning rainbow, for her own label, Red Lotus. In later interviews, she admitted that it was a tough task. Non-cooperation came from the owners of the shoot locations and other third parties, as well as friends and family who were not enthusiastic about her decision either. But she did it anyway. The outcome of this unconventional interpretation was refreshingly beautiful and satisfying. 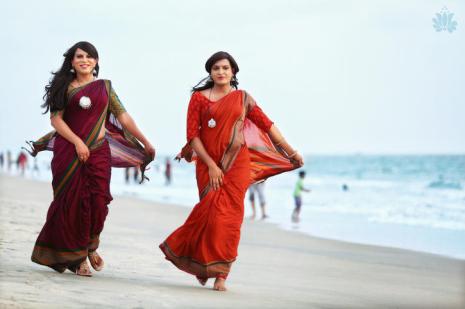 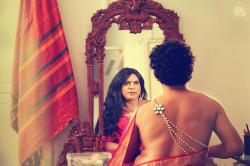 Anjali Ameer is yet another path-breaker with her stubborn courage. A resident of Kochi, she ran away from her home, she had her sex-change operation and made her name as an upcoming model. She is soon to be the first transgender to play a female lead in an Indian movie. The film is directed by National Award winning director Ram and has superstar Mammootty as the male lead.

Kerala will hopefully also see India’s first transgender marriage soon, when Aarav and Sukanyeah, both transgenders, will tie knots once their sex-change surgery procedures are cleared of all legal paperwork.

Kerala right now tops the list of Indian states which are working towards inclusion of the transgender community. It does not mean that it is all a success. Quite a few transgender employees of Kochi metro soon quitted after starting their work because of harassment and insufficient salary. It is still difficult for them to find accommodation anywhere, and even if they do, the rates are unbelievably high. Neighbours threaten the lives of the parents if their children ever decide to come out of the closet.

Even if the Government tries to do their best, all these are holding the trans people back in fear and self-doubt. What is needed to make the whole campaign a reality is to embed the sense of equality into the minds of each and every people.

Given the population our country boasts of, these initiatives seem too little to make any real difference. But every success has its start, and this is a good start nevertheless.