Pink Economy – Everything You Need to Know

Pink Economy is a term one must have come across in many LGBT-related news and articles. It is an umbrella term used to refer to the inclusion of the LGBT community into the mainstream economy, and the provision of similar platform to homosexuality and its representatives.

Although the first things that come to mind when you think of it are gay bars or cruises, it is actually so much more than that. Pink Economy is about LGBT-inclusion in the entire economy, starting from employment to customer-base, or so it should be ideally.

The three phases of Pink Economy

One cannot carbon-date homosexuality. But the time around when the business world started to realise that gay people buy stuffs too and it is a potential market they somehow forgot to tap, is around the 19th century.

This first phase is known as the Underground Phase, when the concept of homosexuality was still very much under the covers and gay people were still publicly persecuted. However, many institutions, especially restaurants, bars, nightclubs and some occasional magazines catered to the community. It was not very open and was more or less restricted to Europe and some parts of USA, and thus got easily disintegrated between the two World Wars.

The LGBT community took a really long time to recover from the hit they took during the WWII era. Oppression was rampant on both sides of the war. But by the nature of law, stricter were the rules, more were the number of secret associations. Their meetings formed the foundation of many LGBT associations, but they were mostly limited to enclosed interests like small scale bars, book clubs, brothels and cabarets. It was not really an open economy till the 1960s.

The Stonewall Riots of 1969 is considered to be the match that lit modern LGBT movement. That along with HIV/AIDS pandemic helped to develop a mass awareness in the United States, which kept on spreading to the rest of the world.

Discrimination and taboos have often cost India potential revenue or employment. As per a study done by Professor Lee Badgett of University of Massachusetts, Amherst done for the World Bank, Indian economy has been losing 0.1%-1.7% GDP because of Section 377, which was recently read down, decriminalising homosexual acts. In 2012 alone, 112 billion to 1.7 trillion rupees was the cost of homophobia. 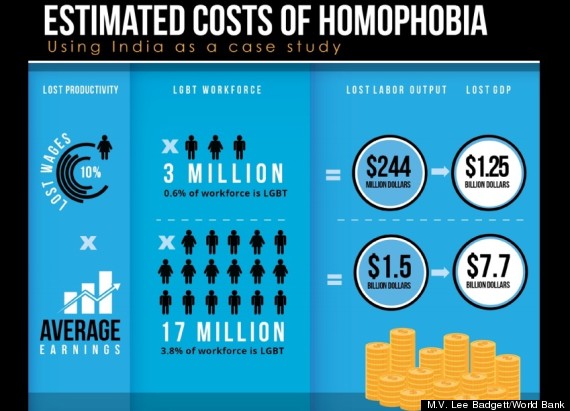 Many modern Indian establishments already had strategies in place to include and cater to the LGBT community in their service. In fact, among the petitioners against the Code, there were a couple of Indian hoteliers as well. But now with the clean-chit from the Supreme Court, more and more avenues will be opened up for the companies.

Hospitality and cultural sectors are the ones which mostly deal with the Pink Economy when it comes to the market. With the draconian law gone, those brands can now include same-sex couples into their strategies as well.

In an interview with Financial Express, one of the above-mentioned hoteliers, Keshav Suri of Lalit hotel chain said how being gay and trans-friendly has definitely brought him more business.

Godrej, Tata Group and IBM India are among the other big names of the Indian economy which have inclusive workplace policies. With such names leading the party, hopefully the smaller companies too will be able to follow their footsteps.

But the question remains that whether Pink Economy is an inclusion of the community in the true sense. In many occasions, it has been called Pink Money, which refers to only a certain portion of the LGBT community who are backed by enough purchasing power to be a market in itself. It has often been called Pink Capitalism as well, which is a not-so-subtle nod at the fact that it is more about commercialisation than representation.

Another big problem, especially in the western countries is that Pink Economy is often restricted to homosexual males, who are also preferably cisgender and white. But that is only one fraction of all the people who deserve to be included in it.

If we replace sexuality with gender roles, we can understand it even better. In the light of the recent surge in the Feminist Movement, many organisations have taken to making “women-centric” products, advertisements or promotional campaigns. But if you dig deep, most of them turn out to be an effort by the brand to jump the latest social bandwagon than actually doing something for the minority they are trying to empower.

Same happens with the LGBT community. While it is true that any representation matters, it is also true that such superficial efforts using LGBT people like a poster-child do not do much for the community itself. Many critics have also accused Pink Economy of not really creating a space for the gay and trans-people as they would like to, but actually forcing them into the binary and hetero-normative standards as the marketers deem fit. 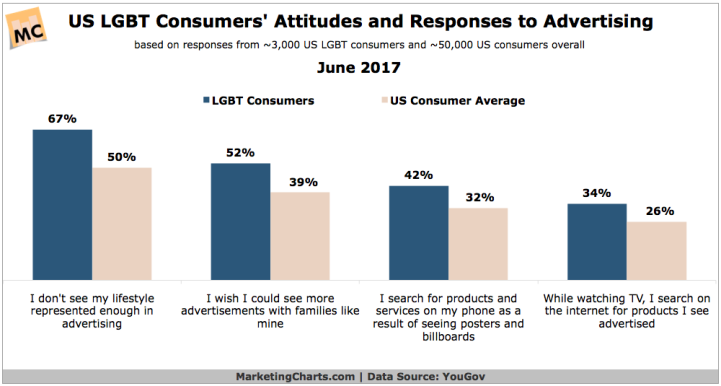 In this study, as we can see, majority of LGBT consumers in USA have said that they do not see their lifestyle or their families represented enough in the advertisements.

And to be really honest, the fact that the market has a whole new, colour-themed name, does not really send out a very genuinely inclusive message, does it? Representation of diversity does not necessarily include differentiation, and it is something everyone should remember at all times.