What it means to be an LGBT ally?

There is a saying in English, ‘count your blessings’. But as the socio-political world stands at present, maybe it should just be changed to ‘count your privileges.’

Almost everyone in the world are born with some privilege or the other, be it gender, race, skin colour, sexuality or sometimes, even the place or family of birth. But more often than not, the ones at the receiving end of the benefits of that privilege do not count it to be so at all.

It is easy to stand at a position of privilege and think that everyone else has it the same. It is easy to keep believing in the status quo when it does not affect you or your close ones in any way.

This quote by famous author and game designer (Dragon Age), David Gaider, sums up the concept of privilege perfectly.

One of the most glaring instances of this in the contemporary world is reflected in the LGBT issue. With the movement getting more and more prominence every passing day, one can safely say that LGBT ally-ship at present is highest than ever. From basic understanding and empathy to help creating circles for the LGBT community at a larger stage, the allies of the movement are being a lot more helpful than before.

Not that it is something worth celebrating, because being an ally in this case is equivalent to being humane. Nevertheless, it is a stepping stone.

Who is an ally of the LGBT community?

‘Ally’ is a term usually used to define a heterosexual cisgender person, who believes in LGBT equality, supports all their causes and movements and stands against all forms of hate, violence and discrimination against the community.

It is important to note here that allies can be there within a community as well. A transgender person can be an ally to the bisexual community. But it is often those who do not fall under the LGBT spectrum, fail to live up to their responsibilities as an ally. 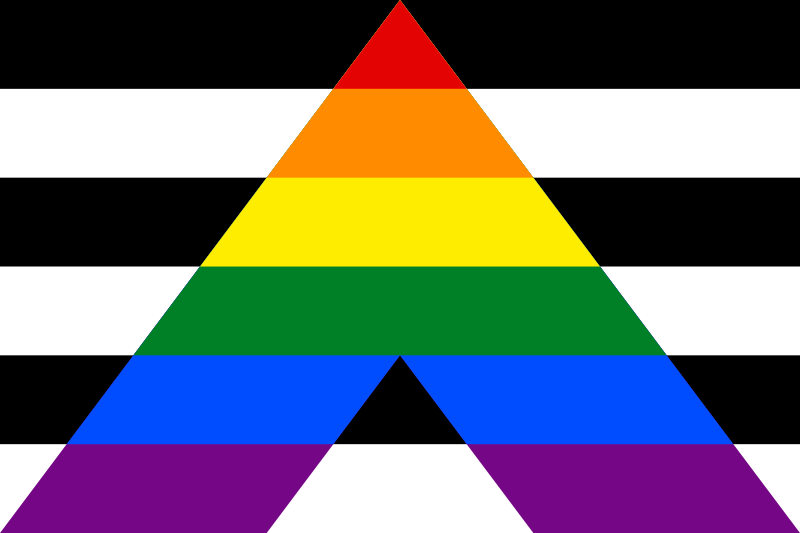 This is the LGBT ally flag, which one can mostly see in the hands of allies in pride marches or on their lapel pins.

The line between being a true ally and being a patronizing supporter is thin, and sometimes people cross it without even knowing how problematic their action is. And while it is true that there hasn’t been enough education or exposure about the LGBT issue up until recently, it cannot be used as an excuse for such behaviour.

What can you do to be a true ally?

Coming back to what this article started with, the first thing to do as an ally is to check your privilege. Whether you are from a society which is pro-LGBT or not, if you are a straight cis person, you have had it easier – it is as simple as that. Seeing that and acknowledging that is the most important thing to do.

However, that is only the first step.

As an ally, remember that you are there to make sure that the voices of the LGBT people are heard louder and better, not to drown theirs with yours, no matter what positive things you have to say. You are also there to learn and educate yourself with their narratives, not the other way round. Speaking only when requested to, and making space otherwise, is one of the most important yet underrated forms of ally-ship.

There can always be people around you who are struggling with their identities or having trouble to come out. Unless you know them well enough and for a considerably longer period, do not jump at the conclusion that someone is straight and cisgender. Give them the space they deserve.

Use the correct names and pronouns

Using dead-names and wrong pronouns, even after someone has let you known of their preference, is as bad as an ally you can get. Irrespective of whether they have legally taken the name or undergone SRS, always make sure to call them by their preferred name and pronoun.

Try and be actively inclusive

Hurt does not always come in the form of violence. Sometimes casual remarks, insulting comments or mean behaviour can leave marks deeper than we think, especially if they are frequent. Being an ally does not mean you have to “save” your LGBT friends. Calling out homophobia, refusing to laugh at jokes targeting the LGBT community and standing up against similar remarks go a long way towards creating safe spaces for the LGBT people.

Always remember, you are not doing anyone a favour by being an ally. You are simply doing your part as someone who has a higher socio-political privilege. You are not there to save, validate or speak for the LGBT community, but to help their voices be louder and their footing stronger by lending a part of your privilege to them.

Last but not the least, it is necessary to remember that you are here to be an ally, and not an advocate. Whether you are a parent, a sibling or a friend, there is always more for you to learn, different ways to be a better ally. Educate yourself as much as you can by reading or watching works of LGBT writers and content creators, looking up their interviews, finding out about the LGBT history and the ones contributing towards it.

There is a common trope where certain people love to think there has been “enough” discussions on this matter. To know how wrong that is, and to help keep the conversation going is the most important aspect of being an ally.